I’ve read 12 Rules for Life: An Antidote to Chaos by Jordan Peterson.

I’ve heard about Professor Jordan Peterson because of my colleague, who is a fan of him. I’ve watched the famous BBC interview with Cathy Newman. The interview itself is fun to watch as a lesson in debating. Feel free to google it, there are a plenty of recording and analysis of the interview on youtube. I’ve got intrigued and decided to give Peterson’s latest book a shot.

The book is structured around 12 rules that the author believes are essential. I think the book is a bit chaotic and the author mixes life advice, philosophy, describing famous stories and authors. In some places, it is a good read, in others a bit boring. The book is full of various ideas, below I’ll describe what resonated with me the most. There are a few places where I don’t share the author opinions, and I’m ignoring them here.

This is probably the most important theme in the book. Peterson seems to look at responsibility in a stoic way. Life is suffering and pain, but you need to take the responsibility and do your part.

To me, this sounds similar to the emperor Marcus Aurelius, who was never a military man, nevertheless spent most part of his reign fighting the Marcomannic wars, instead of pursuing philosophy. He did succeed, although he had never really enjoyed it.

A conflict is hard, but sometimes a conflict now can prevent further suffering or losing something important. E.g. in a marriage, it is better to discuss the issues now, instead of letting them eat your relationship slowly. Also, people willing to enter the conflict (use violence, discuss the issues at hand), actually need to engage in it less often.

Take responsibility for your dependents, make the effort to teach your children; articulate your needs to the loved ones. Also, imagine you’re responsible for someone — act yourself like you’d want that person to act.

Make sure your life is in a good order, before attempting to fix worlds problems. Which reminds me of this image by A. Mleczko: 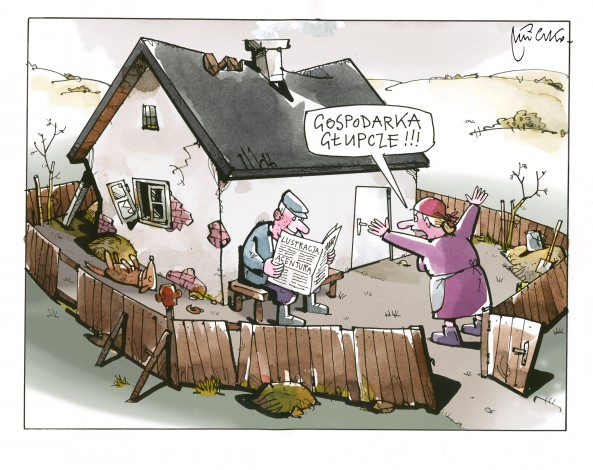 Gospodarka, głupcze translates to Economy, stupid. The man in the picture reads a newspaper with articles about conspiracy theories, foreign agents, and communist regime apparatchiks.

Purse what is meaningful. Be disciplined and improve problems around you. Like in the hacker way, focus on the most important things first.

Smile and the world will smile back at you #

Surprisingly, when you smile, you feel happy. Take the posture of a confident person — stand up straight with your shoulders back. And live up to it.

Learning is somewhere in between what we know and what is dangerous. Too safe environments are not fun, and won’t teach you too much.

Retrospect, start noticing things. Fix what you can fix. Don’t worry about the rest. Especially, don’t try to compare with the other folks. Compare against your previous self.

Conversation is a learning opportunity #

True listening is really rare. Try to listen what others have to say, instead of waiting for your turn to talk. Routinely summarize what the other participants said during a conversation.

Thinking is listening to yourself.

We need to think and talk to clarify the ideas and to unclutter our minds. One can say that we outsource our own sanity.

So, listen, to yourself and to those with whom you are speaking. Your wisdom then consists not of the knowledge you already have, but the continual search for knowledge, which is the highest form of wisdom.

Don’t solve problems for folks — listen instead of giving the advice (side note: you give an advice to feel superior). Sounds a lot like Socrates. Implementing this in full is Freudian psychoanalysis, which is a long process. In practice, you can’t be that orthodox. But don’t jump into giving unsolicited advises, really, listen first.

Articulate your needs or wants. Especially to folks that matter to you. Know what you want. Be honest with yourself. On the one hand, understand what you want and articulate it. On the other, be the first one to confess and notice your own misdeeds.

Choose your friends wisely. Litmus test — imagine recommending a friend to your daughter or mother. Is he or she good for them?

Similar to the brutal honesty of Steve Jobs in Insanely simple.

Also, keep it simple. When interacting with other, (1) limit the rules, (2) use minimum necessary force.

There is a hardly a family without tragedy or suffering. This is a natural state of affairs. If it happens to you, don’t go into nihilism. Accept it, live up to it, and find joy in little things.

Authors world is a cutthroat place, whit a lot of suffering. But you need to do your duty, improve your position where you can, help the ones that deserve it. Also, appreciate wonders around you.

Taken while reading the book.

Rule 1 / Stand up straight with your shoulders back #

Rule 2 / Treat yourself like someone you are responsible for helping #

Rule 4 / Compare yourself to who you were yesterday #

Rule 7 / Purse what is meaningful (not what is expedient) #

Rule 11 / Do not bother children when they are skateboarding #