Geecon 2018 was an important event in Center- and Eastern- European JVM conference agenda. It was over a year since I’ve attended my last non-elastic related event so I thought it is a great venue to pick up some ideas and look where the industry is heading nowadays. And what a great venue it was!

In this pots I’ll present mostly raw notes I’ve took during the talks. If some of the ideas stick with me, I may explore and refine them later on. Oh, there where 4 concurrent talks at most of the slots, so I can cover only a subset. So the notes are uncomplete and may be misleading. Proceed at your own risk :)

It was a tenth, anniversary GeeCON. Hence the cake: 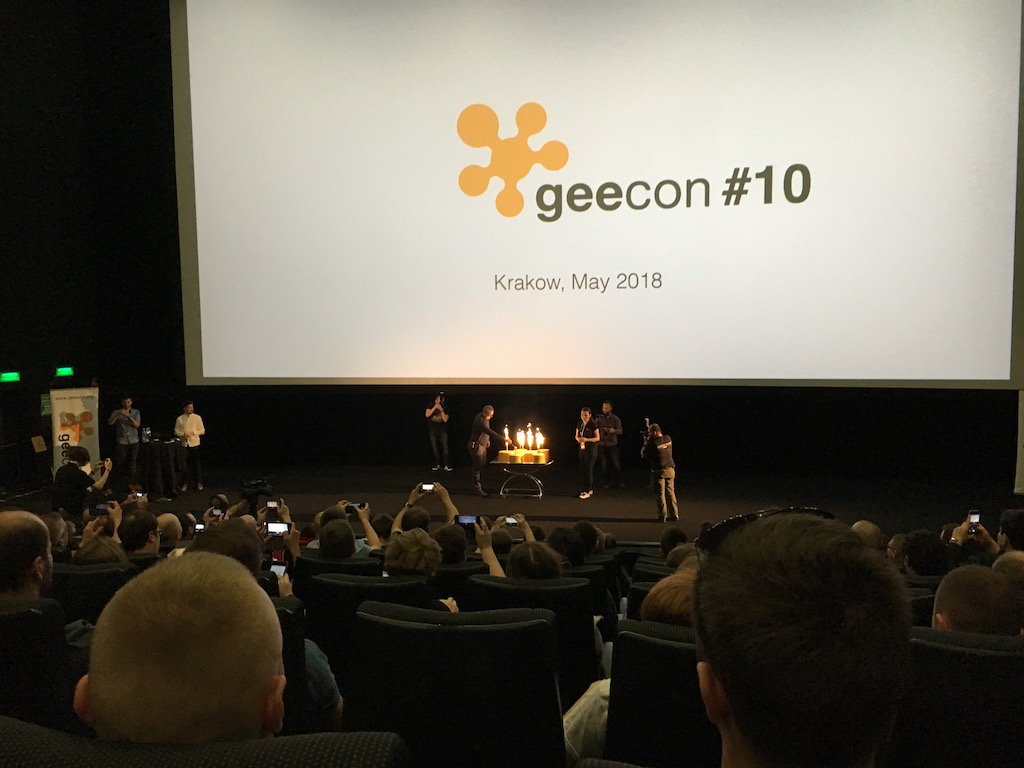 I think it was a great event, with lot of interesting talks and good speakers. I had a very good time and feel it was three days well spend. Props for the organizing committee for all their hard work on GeeCON over the years.

Well, I’ve attended most of the sessions, so I didn’t really have the time to visit and chat with majority of the folks there, but a honorable mention goes to zooplus. They are main pet-product supplier for some of my friends and I was surprised to learn that then have an office in Krakow with few dozens of software engineers :).

A lot of big financial institutions were present, it’s good to see they base a sizable chunk of their IT operations in Poland. It is a tendency that we’ve seen for quite some time, but looks like with Brexit it is not slowing down.

Allegro which is headquarterd in Poznań, my home town, and has offices in 6 or 6 major Polish cities was quite strong.

Scala-wizards from Virtuuslab where also present, hence the nice stickers. 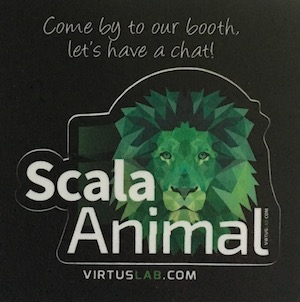 A War of Words: Self-Awareness for Introverts #

A strange talk, coming from Cliff Click, based on his realization that he can’t process emotions and talk at the same time — find the right words at the same time. The talk gave some examples of emotional responses of an introvert during various stressful situations, like being verbally assaulted or … salary negotiations.

Nice talk from Daniel Sawano. He preached the concept of rotating secrets often, and reiterated some important concepts in cloud apps security.

What the annotations done to us? #

This talk by Adam Warski from software mill was dear to my heart. How the modern frameworks abuse annotations and offered some alternatives, especially in the java 8+ world.

@adamwarski reveals at #geecon that annotations are not only ugly. They were also tested on animals! #petclinic #spring pic.twitter.com/XiY4vctGwd

Nicely paced talk, one of the speakers acted as a gRPC fanboy and the other as someone who is satisfied with REST. They took turns speaking and illustrated the talk with an elaborate demo. I enjoyed that one. 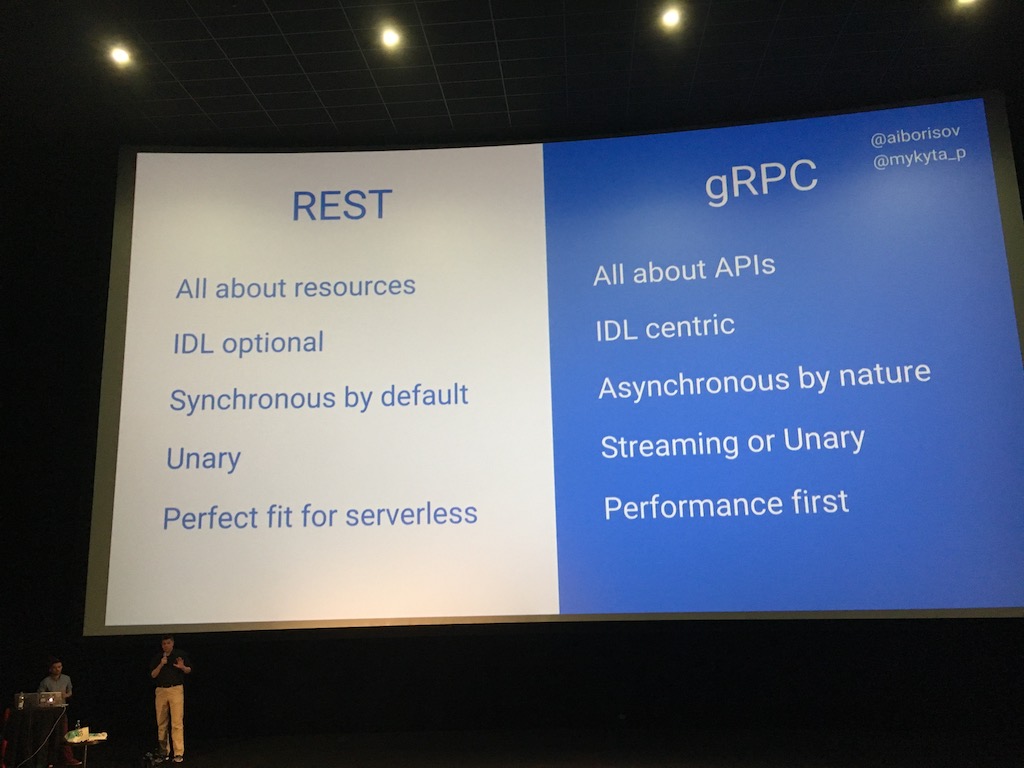 Starting with Ethereum, a developer approach #

Note for future reader — it’s 2018 and a day without crypto/blockchain is a day wasted.

Marcin Moskała presented this new feature of Kotlin. He actually did a deep dive, and showed how the corutines are implemented. 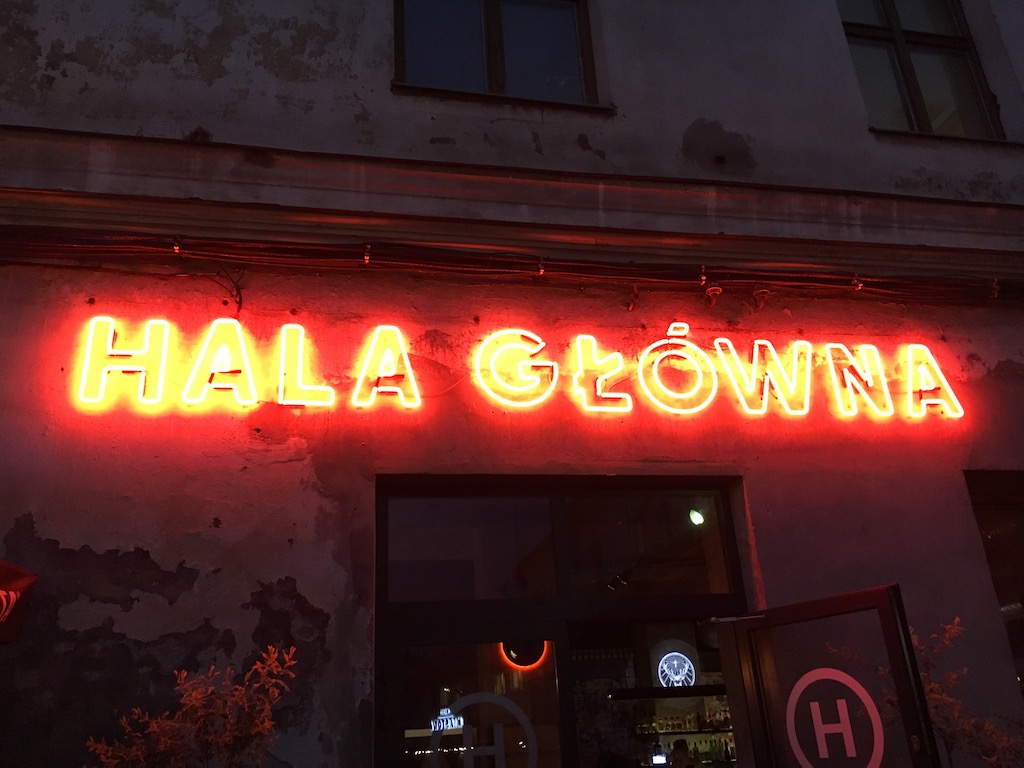 The talks ended in the evening and a party in Hala Główna followed. I had a good time and some interesting conversations with other conference attendees. However, I think this was the weakest part of the event 👎. The pub was nice and hipster, but the music was too loud to sustain a good conversation and the speakers' dinner was held at the same time in a different place. I feel like the split was a bit artificial and alienated the speakers. Now, I don’t mind an extra speakers' dinner, but it cloud have been held on the day #2. Don’t get me wrong, I had a good time and really enjoyed the conversations, but I feel it cloud have been so much better.

Very thoughtful talk by Ionut Balosin. He listed some of the important java 9 features and presented his benchmark results. Good talk both as a tour of the features and in giving suggestions on when to use them. 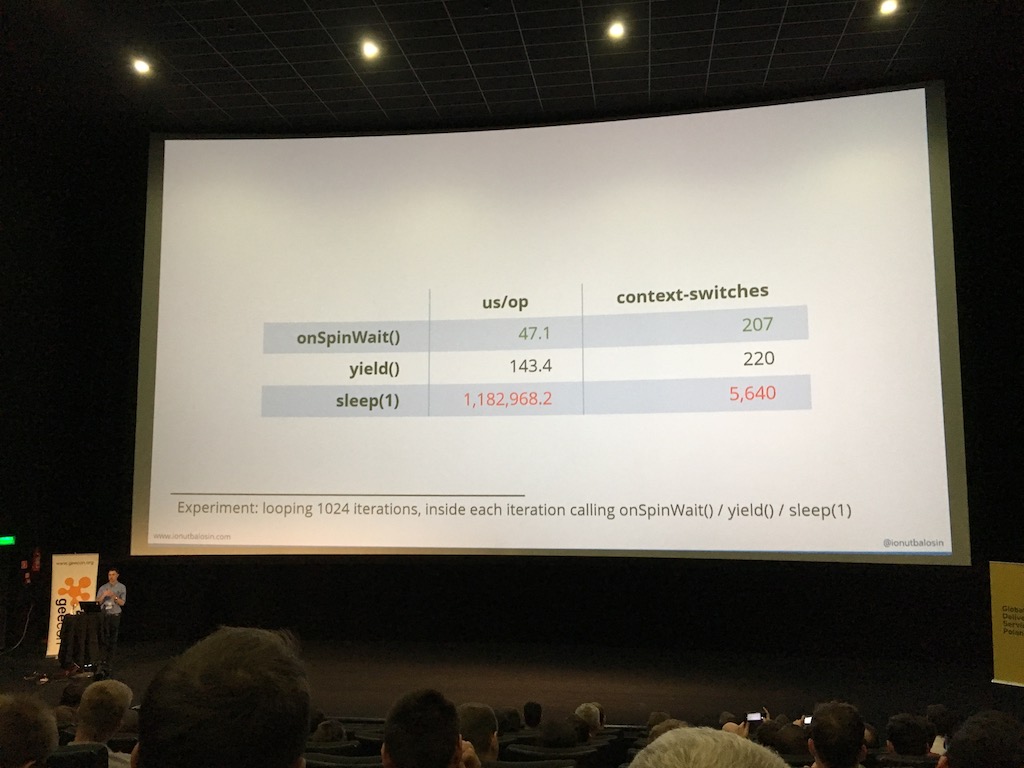 The future of Java # 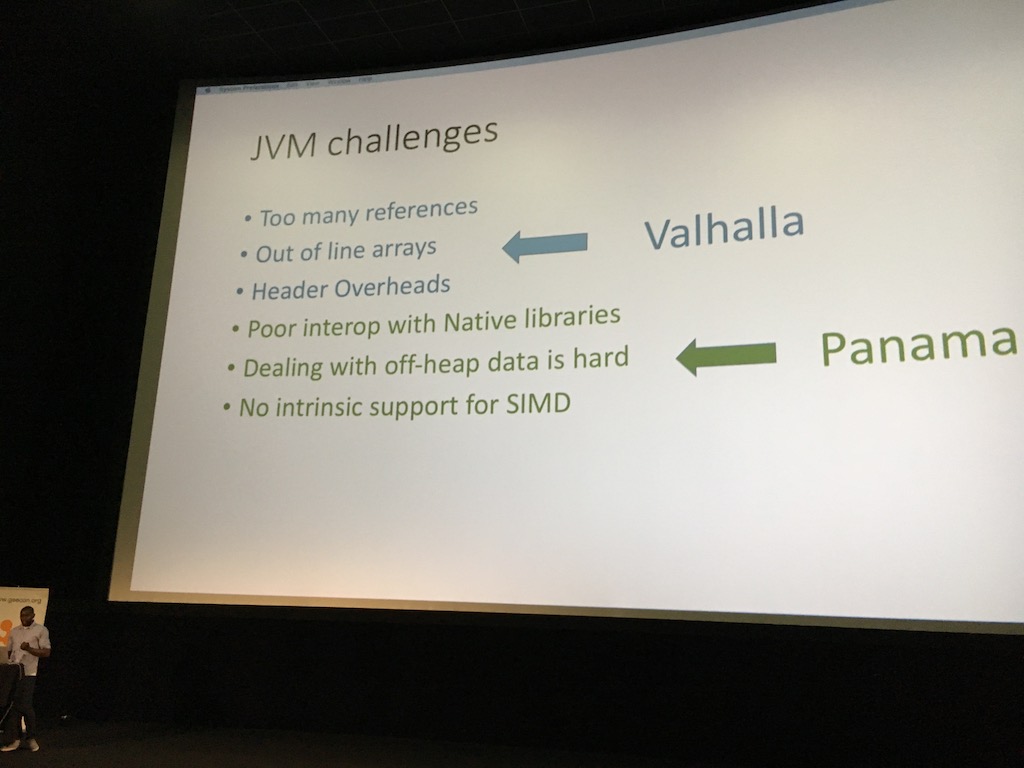 A crash course in modern hardware #

Cliff Click again, this talk was a good continuation of the Java Future. Cliff described what changed in the modern hardware since the von Naumann model.

Modern SQL: evolution of a dinosaur #

This was one of the best talks on the conference. Markus Winand blogs at modernsql and use-the-index-luke. While sql is a boring subject in 2018 (c’mon we have nosql for over a decade), Markus was super enthusiastic. He explanation was clear and examples illustrative. Moreover, he coherently presented the evolution of the SQL standard since the relation days of SQL92. I’ve enjoyed it so much.

Jakub Kubryński who promises he is not an ivory tower architect, and can code still :) The talk reveled around the idea that you can’t improve what you don’t measure. And that it applies to the software architecture as well.

Bruno Bossola preached on how important is to check your dependencies, as they are vulnerable. Good talk, entertaining speaker and nice demo. Plus, I’ve learned that UK fruits are not real fruits. Italian ones are!

Nothing but Models: Quest for the Roots of Complexity #

Jurgen started with a so-so joke, but it only got better afterwards. It turned to be nice and entertaining talk. Perfect to close the day #2. I’ve learned how important is to present your idea in a way that will convince another people and some strategies on how to do that. I actually want to add one of his books to my reading list :)

Charlie Gracie presented OpenJ9 JVM and gave a tour of its GC algorithms. He also gave some rule of thumb on when to apply which. With the usual disclaimer, benchmark before and after tuning.

It seems that OpenJ9 has a smaller memory footprint in comparison to hotspot. One of their GC algorithms — metronome — is quite unique and offers soft real-time characteristics. Another interesting feature is the class cache, but hotspot is catching up with CDS (see the next talk). 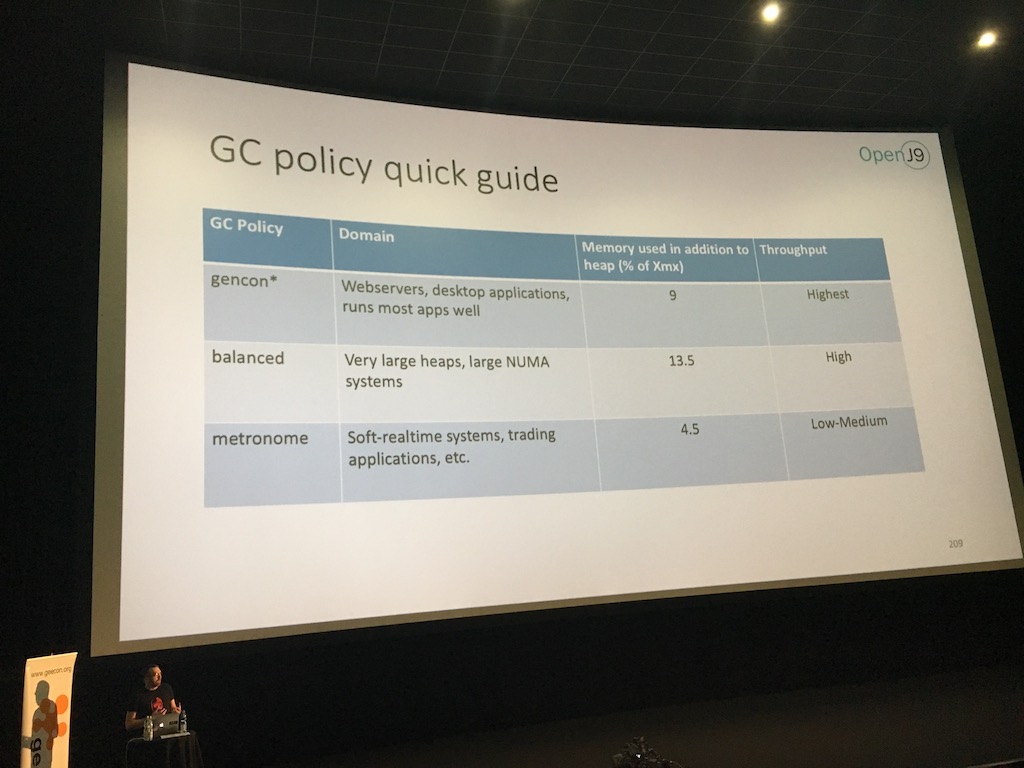 Volker Simonis described and demoed class data sharing. He also discussed some issues with the current approach and how to work around them. I’m quite excited to try it on some of my services and check if there are any start-up time and mem footprint gains. 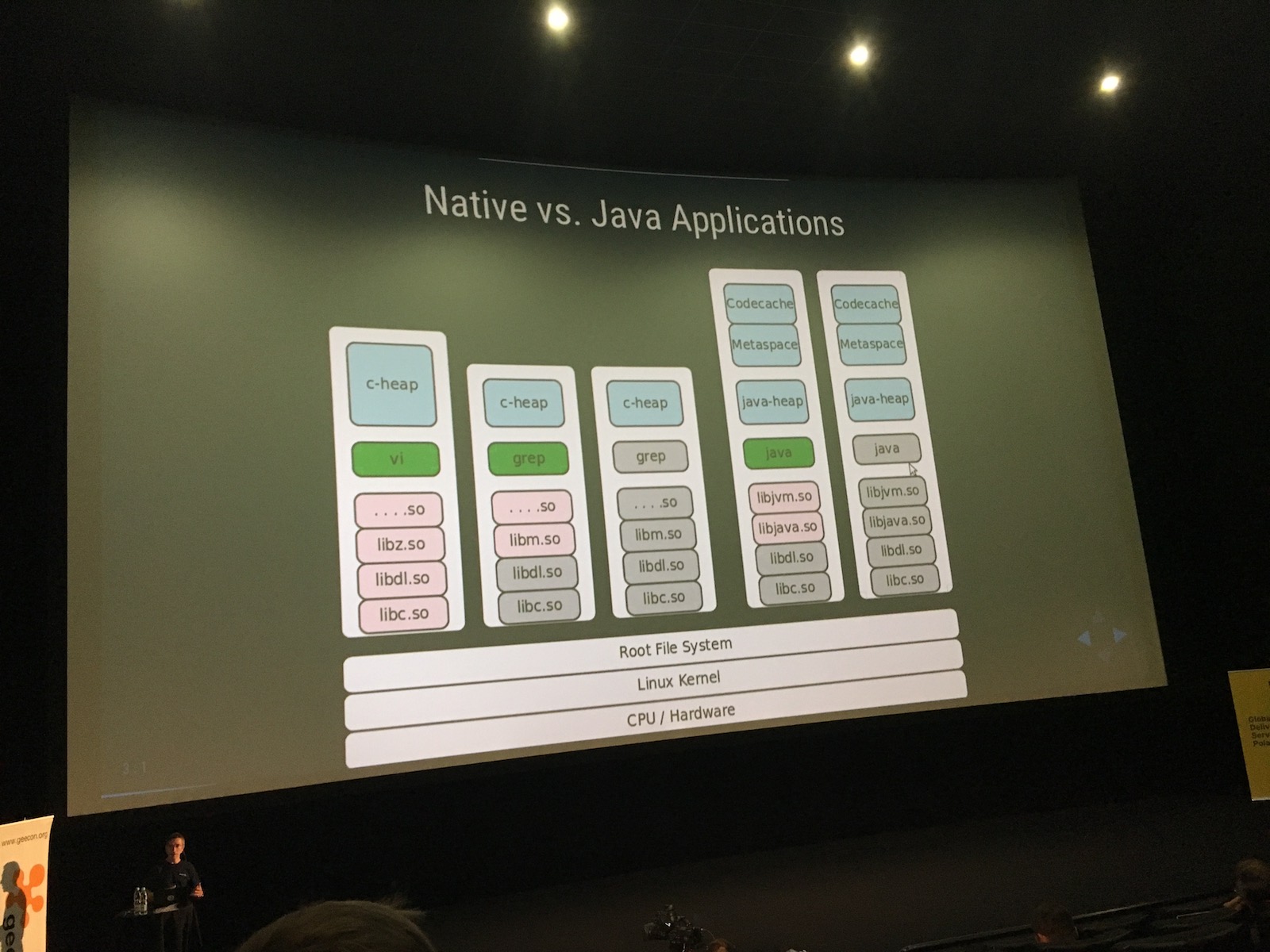 Aleksey Shipiiev is quite famous in the java internals world, I was really excited about this talk and Aleksey indeed delivered. Also, I’ve shaken his hand after the talk. Does it get any better?

The key take-aways are these two rules:

They can give you a correct code 99.9% percent of cases and are enough unless you write a high-perf library. I blockchain, again! this time by Andrzej Grzesik.

what can you do with Bitcoin?

This was a talk by my colleague Philipp Kern. Fast paced and entertaining.

#GeeCON slides on "NoSQL Means No Security?" with MongoDB, Redis, and Elasticsearchhttps://t.co/7hZ7yEiivq
Thanks for another great GeeCON! pic.twitter.com/6rIxRDNRp0

Hanno Embregts shared his exp on switching to dvorak. Spoiler alert: it wasn’t for speed, and 1y+ was not enough to beat his querty speed record :)

Thank you #geecon attendees for listening to my very geeky thoughts on keyboard layouts! The slide deck can be found here: https://t.co/pUYSxOxWie

All of the talks were recorded and the videos should be available shortly on the geecon youtube channel.